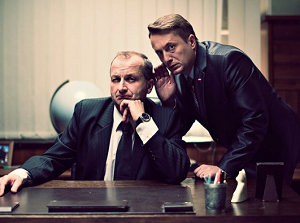 Left to right, the Chairman and Mariusz.
Advertisement:

The Chairman's Ear (Polish: Ucho Prezesa) is a Polish political comedy web-series, created by Robert Górski. The show is a satire of the then-current Polish government, and the chairman of the ruling party, Jaroslaw Kaczynski

The Chairman, played by Górski, is residing in "THAT office, on THAT street",note referring to Kaczynski's party's real-life office on Nowogrodzka Str. in Warsaw from which he controls the government and assesses the situation of the country. Other recurring characters include Mariusz, the Chairman's Beleaguered Assistant, and the secretary, Basia. The three interact with a plethora of thinly-veiled caricatures of MPs, ministers and other important people of Polish politics and thereabouts.

Four seasons were produced. The first three seasons, sans special episodes produced for a video-streaming service Showmax, used to be available on the official YT channel

with English subtitles, but they were removed in February 2019, and were aired in syndication after Showmax's closure.

Season 1 spoilers (including the bonus 15th and 16th episode) are unmarked.