Film / Track of the Moon Beast 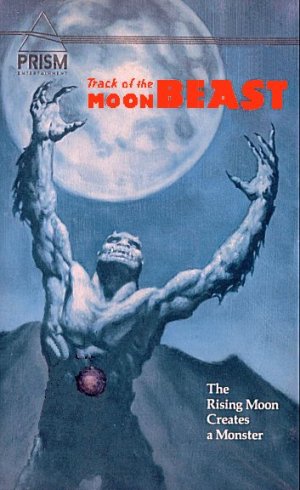 Track of the Moon Beast is a horror movie about a somewhat boring minerology grad student named Paul, who becomes slightly less boring when he's struck by a radioactive fragment of moon rock during a meteor shower, causing him to transform into a lizard monster when under the light of the moon, because of something about Native American gods.

Hoping to save Paul are his Love Interest Kathy and fellow professor and Magical Native American Johnny Longbow. Hoping to save the movie is an out-of-place musical performance of a song called "California Lady." Can either of them succeed? Probably not.

Moon Beast was one of numerous '70s low budget horror movies created by regional filmmakers. In this case, it was filmed on location in and around Albuquerque, New Mexico by director Richard Ashe (credited as Dick Ashe) in his only directorial effort, with a cast made up largely of local performers. The screenplay was cowritten by Bill Finger, one of the creators of Batman, and Charles Sinclair, who claimed that he and Finger wrote the whole thing over a weekend (which, based on the film itself, is not hard to believe). Moon Beast was shot in the summer of 1972 but wasn't released for almost four years, due to the producers failing to secure a distributor before filming concluded.

See also Werewolf (1996), another movie set in the American Southwest about a boring guy named Paul who turns into some kind of were-beast while a supporting character makes confusing references to Count Dracula.