Film / It Lives by Night 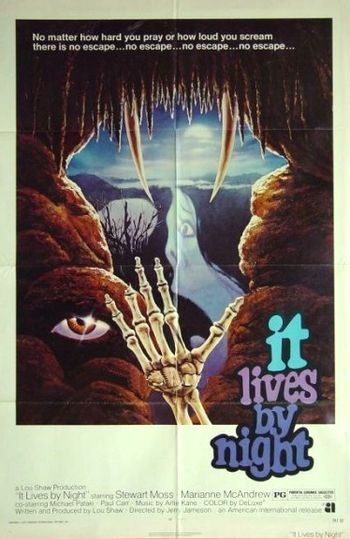 It Lives By Night, also known as The Bat People, is an American International Pictures horror film from 1974 that's best known for its appearance on Mystery Science Theater 3000. It's the story of a researcher (Stewart Moss) and his wife (Marianne McAndrew) who suffer a case of The Stupids and wander away from the tour group in a cave for a bit of honeymoon-making. Of course, they are attacked by a bat and he gets bitten, and from then on he periodically turns into a sort of half-bat-half-human monster.

His symptoms are first mistaken for rabies, as the Grooviest Doctor in the World ascertains. However, this turns out not to be the case. Given the unexplained, violent deaths that tend to follow cases like this, law enforcement becomes interested. Said law enforcement is one loathsome, perverted cop (Michael Pataki) who seems to have a thing for women in vulnerable situations.

Just what will be the fate of our hapless, transforming protagonist? Can he rid the bats from his belfry and return to a normal life? Will he outwit the lecherous Sergeant? Will he lay with his pinched, ferret-y killjoy of a wife to infect her with his were-bat affliction, and then run off to kill a smelly homeless guy? Answer key: no, kinda, NOOOOOOOO! and yes.

Tropes found in It Lives By Night: