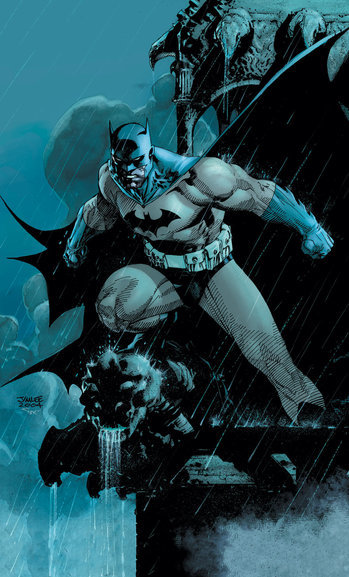 "Ladies. Gentlemen. You have eaten well. You've eaten Gotham's wealth. Its spirit. Your feast is nearly over. From this moment on — none of you are safe."

Bruce Wayne was a carefree child born into the humongously wealthy and prominent Wayne family, but one night, after seeing a movie (usually something to do with Zorro - if you know the background of Zorro, you'll know why that's important), he and his loving parents took a shortcut through a dark alleyway, inevitably leading to a mugger (named Joe Chill in most versions) shooting both of them dead.

The distraught Bruce was raised in current continuity by the family butler, Alfred Pennyworth, as well as the family doctor, Leslie Thompkins. (pre-Crisis, Bruce was raised by his uncle Philip Wayne, with Alfred only joining the Wayne household in Bruce's adulthood). The memory, however, would never fade, and Bruce, realizing what a Crapsack World Gotham was, decided to do something about it.

As soon as he was of age to inherit the family fortune, Bruce engaged on a world-wide journey, rigorously studying mathematics, science, martial arts, you name it. Many years later, he returned to Gotham, ready to fight crime as a vigilante, but on his first night out, realized that he lacked one element: fear.

When a bat that suddenly crashed into his living room reminded him of an incident in his youth, when he stumbled into a cave full of bats, he decided to adopt a bat motif as a means to terrify criminals and become the legendary figure Batman. This has worked to some degree, as most common criminals are scared shitless of him, and organized crime began to lose its hold on the city, but nearly as soon as Batman made his debut, a new breed of criminals began to pop up... ones dressed in garish costumes and bearing colorful masks... which unfortunately causes many people to wonder if Batman is directly responsible for the criminals he faces.

As years went on, Bruce has joined many superteams in the fight against crime, most notably the Justice League of America and the Outsiders. Unfortunately, due to the growing cynicism in the DC Universe, Batman began to distrust others more and more, which was ultimately addressed in Infinite Crisis, where the Brother Eye satellite he created was responsible for the creation and control of the metahuman-hunting cyborgs, the O.M.A.C.s. Following his Heel Realization, Bruce took off for a year in order to rebuild Batman. He was the target of the villainous organization, the Black Glove, who wished to break him utterly and kill him. Barely escaping, he was tortured by the New God Darkseid to be used as a template for new soldiers. After an attempt to kill Darkseid, Bruce Wayne was ultimately 'killed' by the Omega Sanction which sent his soul into an endless loop of lives, each one worse than the last. As expected of as popular a character as he, he came back, and he decided to make the Batman idea an international organization called Batman, Inc, while leaving the title of Gotham's Batman to his first Robin Dick Grayson. After the New 52 reboot, Bruce is back to being Gotham's Batman.

Note that while Bruce Wayne is the most famous and most shown Batman, he is by no means the only one. Various other characters have taken up the mantle. But make no mistake: he is THE Batman. If anyone ever just refers to "Batman", they're referring to Bruce. Terry, Azrael, and Dick typically need an addendum to the name if you're talking about them.

In theory, a small time arsonist, nicknamed partly for his habit of holding a match in his mouth like a cigarette or lollipop; in reality, Batman's go-to persona when infiltrating a criminal enterprise.

A dark, brooding, bat-themed superhero who is also the savior of the corrupt Gotham City.

Example of:
Dark Is Not Evil

A dark, brooding, bat-themed superhero who is also the savior of the corrupt Gotham City.