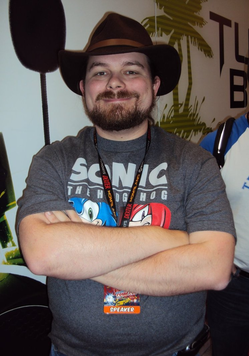 Ian Flynn (born May 31, 1982), also known by his Internet pen name Ian Potto, is an American freelance comic book writer. He is mostly known for his work on Archie Comics' version of Sonic the Hedgehog, where he took over as head writer from Issue #160 until the comic's cancellation. His writing on the comics being generally well-liked, he returned to the position for the next incarnation of the comic after it performed a Channel Hop to IDW Publishing. Aside from this, he has also wrote the official tie-in comics for some of the Sonic video games. And, in 2022, was announced to be writing one himself.

Besides Sonic comics, he is also known for his work on the comic versions of Teenage Mutant Ninja Turtles, Mega Man, as well quite a few of Archie Comics' other series.
Advertisement:

. Being a fan of most of the properties he writes for also means that his works tends to often feature Mythology Gags (at times really obscure ones) and Ascended Memes. Similar to Geoff Johns, Flynn also will drudge up obscure characters (i.e. Nack the Weasel, Bean the Dynamite Duck, Bark the Polar Bear, Honey the Cat, and Breezie the Hedgehog for example) and revamp them for the modern audience, giving them distinct and impactful personality traits to ensure they stick to the readers. His work is big on characterization. He long since has had a desire to work on a Sonic game, having volunteered to write the localization script for Sonic Forces, which instead was written by Ken Pontac and Warren Graff (Happy Tree Friends), as the previous four installments. He got his wish, however, by working on the scripts for Sonic Origins and Sonic Frontiers.

, and his personal webpage can be found here

. He also hosts a bi-weekly podcast covering all forms of geekdom called the BumbleKast alongside his friend Kyle Crouse.