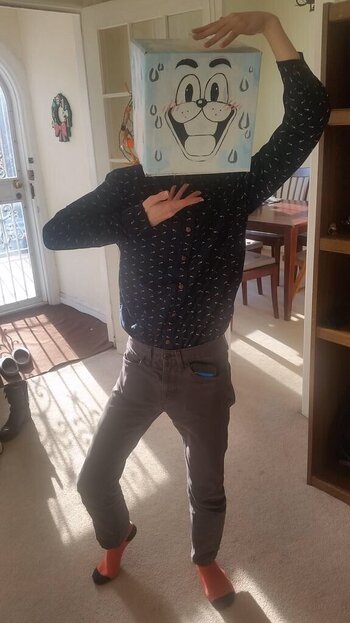 Robert F. "Toby" Fox (born October 11, 1991) is the creator of Undertale and Deltarune. He also produces music, primarily for the Homestuck music team, published on the label What Pumpkin.
Advertisement:

Previously known professionally as "Radiation", Fox began as an amateur musician and ROM-hacker, producing EarthBound: The Halloween Hack. This garnered him some attention for the quality of the music, and after he produced some fan pieces based on work done for Homestuck, Andrew Hussie quickly brought him onto the team. After joining the music team, he more or less became the leader of the music team (at least to the fans) and was both very prolific with his own work and helped with mastering and whatnot.

However, as time ground on, Fox began to seriously push forward his own work, first in the background, and then in 2013 in public via a Kickstarter: a game in the rough JRPG mold, written, directed and scored by him, called Undertale — The Friendly RPG Where Nobody Has To Die.

It certainly was that. It also became his defining work and, without exaggeration, one of the most artistically-influential and important video games of The New '10s. Undertale made Fox a comparative household name (somewhat to his embarrassment) and is now, by far, the thing he is best known for, wholly eclipsing his Homestuck work. He went on to support Undertale in a number of ways, including commissioning a Japanese translation after the game proved shockingly popular in Japan and supporting a number of Undertale side and fan projects.

In 2018, however, he was ready to release something more — something that had existed alongside Undertale the entire time. October 31st saw the release of "Chapter 1" of Deltarune, an episodic "sister game"/"parallel story" to Undertale; nearly three years later, "Chapter 2" was released. While Deltarune features many of the same characters as Undertale, Fox has stated that it is not meant to be set in the same "world" as its predecessor. Once again though, it prominently features Fox's music.

Homestuck albums he has contributed to or worked on:

Toby Fox and his works provide examples of: