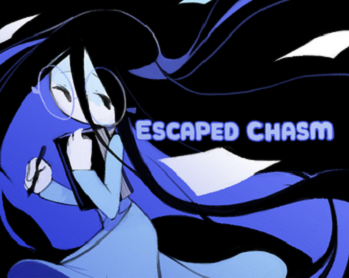 Sometimes... When I close my eyes...
When I left my mind drift...
I can feel a world beyond my own.
Advertisement:

Due to its relatively small size, all spoilers will be unmarked!

Escaped Chasm is a short RPG Maker game, created in 2019 by Temmie Chang, the artist and illustrator of Undertale and Deltarune. It is a prelude to a larger game she hopes to make one day. It can be downloaded for free over here

A recluse girl with a sad deposition and artistic skills waits for her parents to return from a trip. Meanwhile, she dreams of a world, drawing glimpses she has of it. Of course... it couldn't be real.

But maybe one day
I can still become the girl I see in that place.