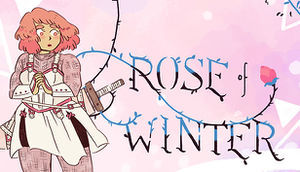 "Beware, evildoers! For I am Rosemary, the Knight of Winter! Or, should it be the Blade of Winter? Oh! Maybe the Rose of Winter? Doesn't that sound impressive? You know, a symbol of hope, bursting through the ice!"
— Rosemary
Advertisement:

is a fantasy-romance Visual Novel created by Pillow Fight, the same people who brought you We Know the Devil, with music composed by Toby Fox, the person who brought you Undertale, and art and writing by Magnolia Porter, Aatmaja Pandya, and Victoria Grace Elliott. It was released on October 17th, 2016.

The game follows Rosemary, a young woman who has left her family's farm to pursue her dream of becoming a real knight. She's finally found a job worthy of a knight—escorting one of four princes across the deadly Mount Needle to the glimmering Starlight City on the other side. Rosemary will have to protect her companion from the bitter cold and dangerous wild animals, and not let their dashing good looks distract her too much. After all, none of them are quite what they seem...

Rose of Winter contains examples of: