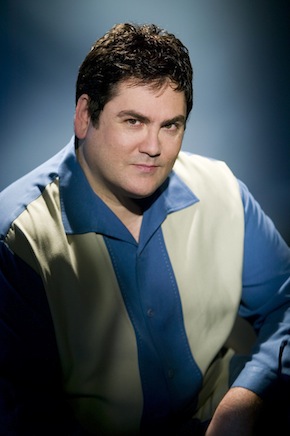 "It’s taken me years to accept what you told me back then, that you were there for me that night. Not as a vigilante swinging to the rescue, but as an ideal, as an inspiration. A voice I heard in darkness, commanding me to stand up. The same voice that tells us when we get beaten down, we can accept being a victim or choose to be the hero of our own stories. And we make that choice by standing up."
— Paul Dini to Batman, Dark Night: A True Batman Story
Advertisement:

Paul Dini (born August 7, 1957 in New York City) is a five-time Emmy award-winning television writer and producer of animated cartoons. He is best known as a producer and writer for several Warner Bros./DC Comics series, including Tiny Toon Adventures, Batman: The Animated Series, Superman: The Animated Series, The New Batman/Superman Adventures, Batman Beyond, Gotham Girls and Duck Dodgers. He also developed and scripted Krypto the Superdog and contributed scripts to many other shows (both for and outside WB), such as He-Man and the Masters of the Universe (1983) (a job he and fellow writer J. Michael Straczynski reportedly both disliked due to Executive Meddling), Fat Albert and the Cosby Kids, Mister T, Dungeons & Dragons (1983), Ewoks, The Transformers, Bill & Ted's Excellent Adventures, Zatanna: Trial of the Crystal Wand, Animaniacs (he created Minerva Mink), Freakazoid!!, Justice League, Justice League Unlimited, Star Wars: The Clone Wars, and Sym-Bionic Titan. After leaving Warner Bros. in early 2004, Dini went on to write and story edit the popular ABC adventure series Lost. Often times when the character of Harley Quinn appears in another animated movie or series, Paul Dini usually has a hand in writing the script somewhere.

Dini has also written several comics stories for DC Comics, including an acclaimed oversized graphic novel series illustrated by painter Alex Ross. (A hardcover collection of the Dini and Ross stories was published in late summer 2005 under the title The World's Greatest Superheroes.) Other books written by Dini for DC have featured his Batman Animated creation Harley Quinn, as well as classic characters Superman, Batman, Captain Marvel, and Zatanna.

In 2006, Dini became the writer for Detective Comics, his first regular comic assignment. In 2009, he became writer of new Batman titles, Batman Streets Of Gotham and Gotham City Sirens. He also launched the short-lived Zatanna solo series, which ended just prior to DC's New 52 relaunch.

In 2010 he created the live action series Tower Prep, which aired on the Cartoon Network. While an excellent series, it came a bad time when CN was clumsily experimenting with live action shows and had the misfortune to follow after their disastrous CN Real campaign. It only lasted one season as a result.

Dini is involved in the Ultimate Spider-Man animated series and is behind Hulk and the Agents of S.M.A.S.H., both produced by Marvel Animation for the Marvel Universe block on Disney XD.

He is co-writer of the Live action Disney movie Maleficent based on Sleeping Beauty starring Angelina Jolie. In addition, he co-wrote one other live action film- the infamous Double Dragon adaptation.

In 2016, he put out a very dark and unsettling autobiography detailing the events surrounding a traumatic robbery he was a victim of in 1993 while writing Batman: The Animated Series called Dark Night: A True Batman Story.

(formerly Quick Stop Entertainment.com.)note Please don't look up or visit Quickstopentertainment.com because the former domain is a spam website now.