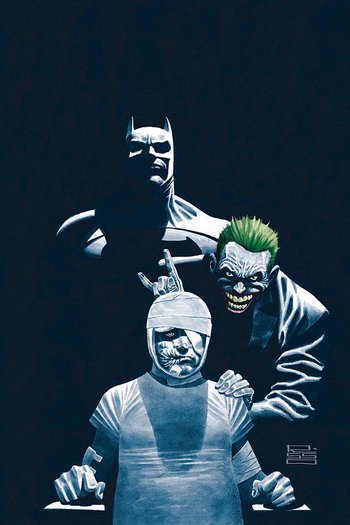 It's The '90s, and animation is hitting notes nobody thought it could possibly hit. Disney and Warner Bros. are two titans within the medium with massive cult hits that are still fondly remembered to this day. One of them would be one of the most celebrated animated series of all time: Batman: The Animated Series. The success of the show even leads to a theatrical feature in the form of Batman: Mask of the Phantasm.

Enter head-writer and fan of cartoons Paul Dini, who in the year of 1993 is having a pretty good time enjoying the rave reviews and positive fan response for Batman: TAS and Tiny Toons. Underneath it though, Dini holds a depressive attitude brought about by uncertainty about the lifestyle he had chosen (symbolized by the large amount of Batman merchandise and animation cels framed and hung on his walls). It doesn't help that Dini also happens to be in a shallow relationship with a very attractive actress who couldn't give less of a damn about him or his work. Following what he perceived to be a disastrous date, Dini decided to take a night walk... during which he finds approached by two thugs who savagely beat and rob him. His face literally broken and traumatically terrified for his life, Dini begins a journey to heal, not just physically, but also emotionally, and better himself with the help of, who else, Batman.

Dark Night: A True Batman Story is an autobiographical graphic novel about Dini's attempts at getting over his trauma with the help of his love for Batman and his mythos. The story was first told on Kevin Smith's podcast Fatman On Batman. Smith urged Dini to put it to paper, despite the writer's hesitation. The book was published in 2016, with art provided by Eduardo Risso.

Not to be confused with the Crisis Crossover event Dark Nights: Metal.