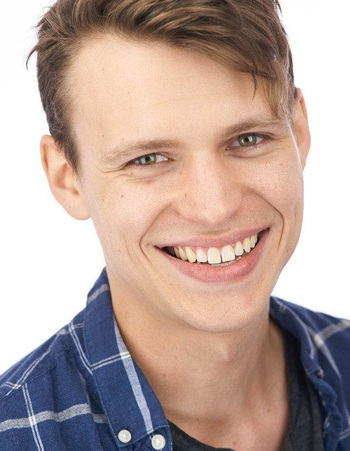 Get excited guys, we’re about to describe Aaron Dismuke here.

Aaron Mitchell Dismuke (born October 13, 1992) was one of few child voice actors in the voice acting field. He is best known as the voice of Alphonse Elric in the first Fullmetal Alchemist (2003) anime, who he voiced when he was 12 years old. However, he had grown out of the role by the time Fullmetal Alchemist: Brotherhood was produced, so Maxey Whitehead filled in for him. He is the cousin of Justin Cook, which helped him find his early roles as a kid. He continues to voice characters for Funimation. He is now well known for voicing Senku in Dr. STONE.

He and FMA co-star Vic Mignogna formed their own "fanbase incarnate" in the form of the Risembool Rangers, which occasionally follow them from con to con.