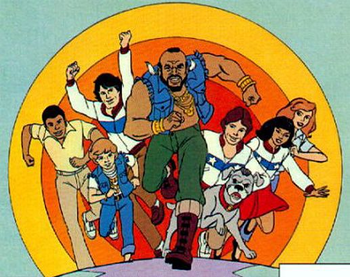 "Catch the action! Catch the mystery! On my show! The best show! Mister T!"

In The '80s, the company Ruby-Spears (the creators of Rubik, the Amazing Cube) decided that Mr. T was cool enough to get his own Animated Adaptation. Mister T is the result.

In this cartoon, Mr. T is a gymnastics coach who travels the world fighting crime and solving mysteries with his team of young gymnasts. Hilarity Ensues, not really intentionally. Each episode had a live action clip of Mr. T shown at the beginning, where he would tell the kids about the situation, and another at the end where he would tell the moral lesson that went with it.

The show ran from 1983 to 1986, and had 30 episodes. The Agony Booth has several full recaps of some of the most bizarre episodes of the series.

Compare with Rambo: The Force of Freedom and Chuck Norris: Karate Kommandos, two other Ruby-Spears adventure cartoons from The '80s based on live-action stars and franchises.

Mystery of the Mister T Tropes: