There Was a Door 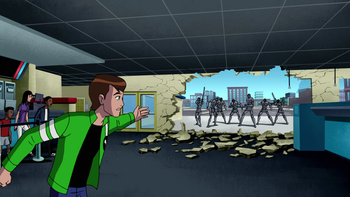 There's a door right there! A glass door!
"That's just like Clark. Perfectly serviceable door, and he makes a hole in the wall."
— Batman, Justice League Abridged
Advertisement:

Some people just don't feel the need to follow certain rules. Like, using a door to enter a room. Instead, they prefer to simply burst through a wall or window in a dramatic fashion, even if it makes no sense or it would have been easier to go the conventional way. This is especially common when someone shoots through a door despite the considerable time and ammo this would take in Real Life. Use of this trope may be an indicator that the buster is really a Small Name, Big Ego and/or not the brightest bulb in the chandelier. Also sometimes an action of the Leeroy Jenkins, who screws up his or her allies' plans for a stealthy entrance by doing this. Another variant is simply kicking the door open and then someone pointing out that it wasn't locked. Sometimes, a variant appears where the entire wall is destroyed except for the door, which the characters may or may not open anyway.

Also often happens in the form of a fake-out, where the audience is led to believe someone will enter through the door when the camera focuses on it, only to have them burst through the wall somewhere on either side instead.

Frequently lampshaded by someone shouting out the trope name, especially the Deadpan Snarker or the disgruntled owner of the building. Also, keep in mind the old joke about the stupid burglar: he breaks two windows, one to get in and one to get out. The gag can run loose if the person goes through a different place every time, or does it just as the hole is being repaired, much to the frustration of the owner.

Oftentimes this is committed because they forgot that We Have the Keys or they are simply Door Dumb. See also Impact Silhouette, Bullet Hole Door, Dungeon Bypass, Super Window Jump, Enter Stage Window, Car Meets House, Boarding Pod, The Exit Is That Way, and Dynamic Entry.

Compare Barrier-Busting Blow, "Open!" Says Me. If the enemy manages to burst through a massive fortification, see Breaching the Wall. When going through the wall (rather than the door) is actually the easier solution, Myopic Architecture may be in play. Not to be confused with Right Through the Wall, which is about someone being entirely too loud about their... well... bedroom business.