Recap / My Little Pony: Friendship Is Magic S8 E21 "A Rockhoof and a Hard Place" 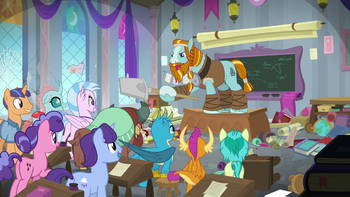 Rockhoof is helping with the excavation of his old village with Professor Fossil. However, between his overpowering strength and his lack of regard for the historical nature of the artifacts, he's not a good fit for the job, so Fossil sends him to Twilight Sparkle. Twilight decides to make him a professor at the School of Friendship. During the class, he starts to tell tales of his fight with an Ursa Major, which enraptures the students, particularly Yona. However, as he acts out more and more, he starts destroying parts of the classroom. Twilight and Applejack ask to speak to him privately, explaining he needs to be less active in the classroom. As they are talking, they witness flames coming out of a school window, and before Twilight can stop him, Rockhoof goes to rescues the students in the classroom below and put the fire out. Too late, he learns that it was just fire from one of Spike and Smolder's fire-breathing contests, and he has ruined some of the sewing Rarity was doing.

As being a teacher is not working out, the Mane 6 try to find Rockhoof a job around Ponyville but none of them prove fruitful. They decide that maybe if they can show Rockhoof how the other Pillars have integrated into society, he might find a route for himself. Twilight and Applejack take Rockhoof across Equestria, finding that Flash Magnus has become a drill sergeant for the royal guard, Mistmane tends to the crystal gardens in the Crystal Empire, Somnabula has become a motivational coach, and Meadowbrook has reopened and expanded her old clinic. Further, Star Swirl is still learning about friendship, and Stygian has become a popular author writing about his own past. Rockhoof feels even more out of place after the trip. Twilight gets another idea, as to have Rockhoof enlist in the hippogriff navy under General Seaspray. As they set sail, Rockhoof directs Seaspray to follow a constellation, remembering that it has always led the way to safety. However, the ship quickly runs aground due to the stars' having shifted positions over the last thousand years, and Seaspray dismisses Rockhoof from the service.

With no other options, Rockhoof asks Twilight to cast a spell that will turn him into a statue, which shocks Twilight. She insists there must be another option, and has Spike teach her class while she tries to work out a solution. In class, Spike has the students write an essay about heroism, which gives Yona an idea. After class, she approaches Rockhoof and reads her essay, describing how she felt like an outsider at first but discovered a way to fit in, and telling him of her appreciation for him. She then shows Rockhoof a crowd of students waiting outside, all eager to hear the rest of his story about fighting the Ursa Major. Twilight, thinking she has found a solution, is surprised to find the crowd hanging on his every word. Seeing how much happiness his stories bring, Twilight appoints Rockhoof as Equestria's official Keeper of Tales so that he can pass his stories of a bygone era on to others. Grateful to have found a purpose that suits him, Rockhoof starts into a new story.