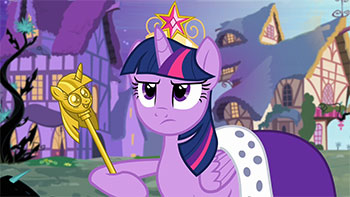 When we last left our heroes, Princess Twilight Sparkle and her friends were looking for answers to why the Everfree Forest is invading Ponyville. Believing the key lies in one of Zecora's potions, Twilight drinks it only to witness a horrifying sight: Princess Luna transforming into Nightmare Moon once more...

Abruptly, Princess Celestia steps in and orders her sister to lower the moon. Nightmare Moon replies that they are not sisters any longer and chases Celestia into the sky, with Twilight struggling to keep up. Though Celestia refuses to attack, a bolt from Nightmare Moon — clearly meant to be lethal — knocks her down to Twilight's sadness, but then she gets back up again; Twilight is happy Celestia is still strong, but is confused when Celestia does not even see or hear her, and she reluctantly arms herself with the Elements of Harmony — in their original gemstone appearances — it is that moment Twilight realizes she is actually witnessing an event in the past. Nightmare Moon is sent into her thousand-year exile, and Twilight comes back to herself in the present day.

Thinking she may find more answers if she looks further into the past, Twilight takes another sip of the potion and watches Discord, in the middle of taunting the alicorn sisters and eating a bag of seeds, turned to stone by the power of the Elements. Then she goes instantly to a third, still-earlier vision — the alicorn sisters discovering the Elements at their source: the Tree of Harmony. This magical tree, located deep within the Everfree Forest, kept the forest in check. Twilight concludes that something must have happened to the tree and ventures into the forest with her friends by her side.

The girls quickly run into trouble when Twilight accidentally angers a cragadile and has trouble flying away to safety. After the others wrangle the beast, the girls become concerned with Twilight's safety and propose she is better off returning to Ponyville to lead in Celestia and Luna's absence while they continue their search for the Tree of Harmony without her. Hurt by her friends' decision, Twilight reluctantly agrees and dejectedly leaves along with Spike. Once she reaches Ponyville, however, Discord berates Twilight into changing her mind and rejoining her friends.

The girls discover the dying Tree of Harmony covered in thorny vines in a cave beneath the ruins of Celestia and Luna's old castle. As the five realize they have no idea how to save the tree without Twilight, she gets ambushed by a group of plant monsters nearby. Spike alerts the rest of the group to save her, and the six all make amends.

Twilight decides that only by returning the Elements of Harmony to the tree will they be able to save it, believing that the bonds of friendship between the girls have become so strong that they no longer need the Elements to keep themselves united. The tree is restored, dispelling the vines and freeing Celestia and Luna from their grasp. Just then, the tree sprouts a flower containing a mysterious box with six keyholes. Unsure of what's inside or where the keys are, Celestia hints that Twilight and her friends will be able to unlock the mystery together.

With everything now back to normal, Discord admits to everypony's anger that he was responsible for the Everfree Forest's invasion: before he was defeated a thousand years ago, he sneakily planted the seeds he was eating to steal the Tree of Harmony's magic and capture the princesses, which only started to grow now because the tree's protective magic held them at bay. However, everything still worked out since Twilight managed to learn another valuable lesson about friendship, and is able to perform her flight flawlessly on the day of the Summer Sun Celebration.

After the Tree of Harmony was restored, it sprouts a mysterious crystal box with six keyholes on it; where the keys are is unknown, but this is a mystery Twilight and her friends won't be solving alone.

After the Tree of Harmony was restored, it sprouts a mysterious crystal box with six keyholes on it; where the keys are is unknown, but this is a mystery Twilight and her friends won't be solving alone.