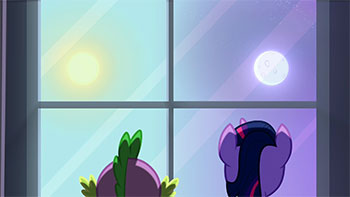 Just another day/night at the office.
Rarity: Oh, don't be so modest. It's everypony's dream to someday wear a crown and have their coronation ceremony preserved in stained glass for all to see.
Rainbow Dash: I don't know if it's everypony's dream...
Special Guest Star: John de Lancie as Discord
Written by Meghan McCarthy
Advertisement:

Princess Twilight Sparkle's friends help her practice for her performance in the upcoming Summer Sun Celebration alongside Princess Celestia and Princess Luna. Twilight still hasn't quite gotten the hang of being an alicorn princess, and is now starting to feel isolated from her friends now that she must stay in Canterlot to carry out her royal duties while the others get to carry on with their lives in Ponyville. Nonetheless, her friends assure her that they will always be united by the Elements of Harmony, and Princess Celestia is still there to encourage her former student in her time of need — that is, until a small black vine sprouts from the floor and creeps after Celestia as she walks away...

Twilight awakens the next morning to find it's not just morning; it's also the middle of the night, because now the sun and the moon are hanging still in the sky, splitting the day and night sky in half. Before Twilight can put together what's going on, a pair of royal guards inform her with urgent news: Princess Celestia and Princess Luna have gone missing! Twilight immediately takes charge to keep the rest of Canterlot from panicking, but things only go downhill when another guard runs in with a message from Ponyville that the Everfree Forest is now invading.

Back in Ponyville, Twilight's friends are putting up with all sorts of problems of their own caused by the spreading forest: thorny vines envelop Fluttershy's cottage and terrify her woodland critters; stubborn weeds that not even Applejack and her family can uproot sprout across Sweet Apple Acres; Rainbow Dash has trouble rounding up spiky thunderclouds that try to zap her with lightning; and clouds of spores cause Rarity's unicorn magic to go haywire. The ponies fret that if the Everfree Forest keeps spreading, it could cover half of Equestria.

Twilight and Spike fly back to Ponyville posthaste to gather the Elements of Harmony, knowing they'll be needing their friends to take on this new threat. With all this chaos running loose, the ponies are certain that Discord is up to his old tricks. When they summon the draconequus to fix "his" mess, however, he protests that he is now reformed and is not the one they should be questioning. As luck would have it, Zecora comes along while fleeing from the out-of-control Everfree Forest — and she just so happens to have a potion that, when combined with Twilight's alicorn magic, may provide the answers they seek.

With a sip of the potion, Twilight finds herself in the middle of an unfamiliar castle. Princess Luna is also there, but Twilight notices something wrong with her: the princess of the night is very angry with her subjects for playing in her sister's day, and covers the sun with the moon, making a dramatic proclamation:

Princess Luna: There can only be one princess in Equestria... and that princess... will be me!

Twilight watches in dread as Luna is enveloped in a shadowy orb and emerges as a black mare with catlike eyes, razor sharp teeth, and a misty mane, evil cackles bursting forth from her mouth.

Twilight sees the flashback of a jealous Luna letting her anger get the better of her causing her to transform into Nightmare Moon.

Twilight sees the flashback of a jealous Luna letting her anger get the better of her causing her to transform into Nightmare Moon.