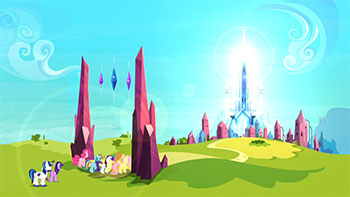 The eponymous empire of crystals.
Princess Cadance needs our help, her magic will not last forever.
I think we can do it, but we need to work together.
We have to get this right, yes we have to make them see.
We can save the Crystal Ponies with their history!
— Twilight Sparkle
Written by Meghan McCarthy
Advertisement:

Princess Celestia is sitting in her throne room when a guard runs into the room. He announces that news has arrived from northern Equestria: "it" has returned, and Celestia, wanting to take immediate action, sends her guards to find Princess Cadance and Shining Armor before writing a letter for Twilight Sparkle to come to Canterlot immediately. In Ponyville, Twilight Sparkle is scurrying around her room looking for quills, books, parchment, and supplies, all the while panicking at the prospect that Princess Celestia has told her that she will be taking a test. In Canterlot, Luna and Celestia discuss Twilight's preparedness for the mission, but are interrupted by Twilight's arrival. Twilight discovers that her supplies are unnecessary, as her test will be a different sort—Princess Celestia explains that the Crystal Empire, a long-forgotten civilization, has returned after a thousand-year absence.

According to Princess Celestia, the Crystal Empire was ruled by King Sombra, an evil unicorn whose heart was black as night. Because the Crystal Empire reflects the nature of the ruler across all of Equestria - bringing light and happiness if the ruler is benevolent, and darkness and sorrow if the ruler is a tyrant - the Princesses transformed Sombra into a shadowy cloud and banished him to the arctic wastes, but not before he cursed the Crystal Empire to disappear along with him. Celestia tasks Twilight and her friends with aiding Shining Armor and Princess Cadance in finding a way to prevent the Crystal Empire from falling back into Sombra's hooves. Celestia reassures her student that she will succeed, and will proceed to the next level of her studies upon her return. As she leaves, Celestia tells her that she, and she alone, must be the one to help Cadance and Shining Armor do what needs to be done.

Twilight, Spike, and the rest of the Mane Six travel to the Frozen North and are greeted by Shining Armor, who urges them to follow him quickly, as the Empire "isn't the only thing that's returned." As they cross the tundra, Shining Armor informs them that King Sombra has been attempting to invade the Empire. Twilight questions what point there is in finding a way to protect the Empire if it's already being protected, when King Sombra, in the form of a shadowy mass, attacks and chases them. Shining Armor stays behind to hold King Sombra off while the others reach the Empire. He escapes, but Sombra curses his horn, preventing him from using his magic.

The Mane Six meet Princess Cadance, who is using her own magic to form a protective shield around the Empire that is keeping King Sombra out. However, she has grown weak due to the constant concentration required to keep it active. Twilight comes up with the idea to interview the Crystal Ponies, and the Mane Six set out to find a way to restore the Crystal Empire to the way it had been. They find that the residents — in a rather dull coloration for a bright kingdom — can't remember anything before King Sombra came to power, and don't want to remember anything about his reign. They head to a nearby library to look for information, and Twilight finds a book with information on the Crystal Fair, a festival that will unite the hearts of the Crystal Ponies. Central to this fair is something called the Crystal Heart, but as they do not have one, Twilight cuts one out of a crystal block to use as a substitute.

Twilight summons the Crystal Ponies to the fair, and as they begin to enjoy themselves, their previously dull coloration begins to brighten, as does their mood, and they begin to remember their previous lives. However, Rainbow Dash overhears a remark that the Crystal Heart is in fact an artifact that the Crystal Ponies power with their love and unity, and that King Sombra hid the Crystal Heart where it would never be found. Rainbow Dash rushes to cover up the fake heart and tells Twilight about the problem. Twilight Sparkle finds the last page in the book had been removed by King Sombra to preempt any attempts at discovering the Heart's significance. Princess Cadance suddenly faints and the magic shield surrounding the Crystal Empire vanishes. King Sombra, seeing his chance, advances into the kingdom...

Continued in "The Crystal Empire – Part 2".

When Twilight is having a panic over an upcoming meeting with Celestia, Spike tries to calm her by saying it's 'just a test'. Not only does it not calm her down, but she inadvertently causes the entire library to jump.

When Twilight is having a panic over an upcoming meeting with Celestia, Spike tries to calm her by saying it's 'just a test'. Not only does it not calm her down, but she inadvertently causes the entire library to jump.