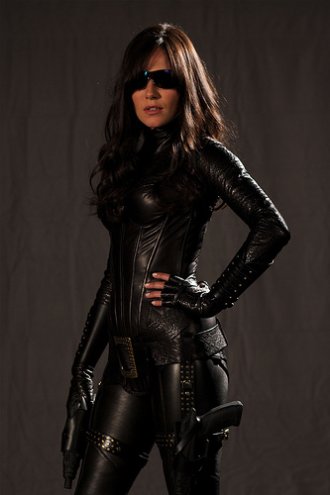 During any infiltration or stealth operation, the female lead will wear an impossibly tight catsuit. It's almost always black, may be shiny leather or latex. It's never a camo pattern or even mottled, and it can't have pockets except for a utility belt and/or gun holster. There will often be a single zipper on the front, which will result in a Navel-Deep Neckline when it's unzipped. The suit will frequently be accompanied by ridiculously high heels. If you see someone in one of these, there's little she can say to convince you she's not a spy (or a fetishist) outside of a Sci-Fi series.

The writers may try to justify it, saying it's a stealth garment with sensor defeating properties — so she's seductively slathered herself in Applied Phlebotinum. It could be for freedom of movement (which doesn't make much sense if the outfit is leather). It could be that she just swam up to the facility and can't ditch the wetsuit. In reality, it's to make the inevitable climbing, shimmying, flipping, and belly-crawling through a Laser Hallway look that much more like a lapdance. Of course, it might also be a deliberate invocation of Distracted by the Sexy and I Have Boobs, You Must Obey! against male guards/suspicious people she might encounter.

Only shows up Spy Drama shows that go light on realism. Any action show that puts a female character through an infiltration scene will use it. Mostly used with at least a wink these days.

Often extremely shiny, with vertical lines that accentuate the lady's... assets, against all logic.

As you may have imagined, this is not something real-life (or realistic fictional) female operatives would wear in the field, though a black turtleneck and cargo pants will pull off a similar look while being much more practical. In fact, this trope originated not with spy fiction at all, but with Catwoman, whose iconic use of this outfit is both the Trope Maker and Trope Namer. A variant of this is the tendency of female ninja in anime and superhero comics to wear excessively stripperiffic outfits.

Brooke and Rachel in Catsuits

Brooke and Rachel wear catsuits when sneaking inside the Tutor Center to steal the Calculus test. Brooke finds them inconvenient due to their lack of pockets.

Brooke and Rachel in Catsuits

Brooke and Rachel wear catsuits when sneaking inside the Tutor Center to steal the Calculus test. Brooke finds them inconvenient due to their lack of pockets.