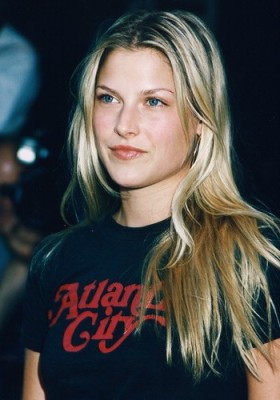 Alison Elizabeth Larter (born February 28, 1976) is an actress from Cherry Hill, New Jersey, who is best known for fanservicey roles and teen films—at least until in the middle of the new millennium for the latter.

She first started out as a hoax celebrity called "Allegra Coleman," a model who has relationships with David Schwimmer and Quentin Tarantino (the latter being "said" to go so far as to break up with his then-girlfriend at the time to date Allegra), and how Woody Allen planned to have a movie with her as the star. When the secret was out, Larter gained fame.

In The '90s and all the way to the middle of the new millennium, she starred in such films as Varsity Blues, where she had the famous whipped-cream bikini on, The Remake of House on Haunted Hill (1999), Final Destination and its sequel, and Jay and Silent Bob Strike Back. She also starred in Dawson's Creek and Chicago Hope,

Larter's next big break was in playing Niki Sanders, a desperate but loving single mother, and her split personality, Jessica, in the series Heroes. Larter's work suffered as the writing for the entire show began to stagger and grow increasingly contrived — including a twist straight out of a Soap Opera, where, afer Niki's death in an explosion in season 3, Larter returns to play Tracy, Niki's sister/clone. After Heroes, she starred in Resident Evil: Extinction and Resident Evil: Afterlife, Marigold, and Obsessed. Obsessed was an all-time low for her, as she was recently nominated for a Razzie Award for Worst Supporting Actress, but she lost to Sienna Miller for her performance in G.I. Joe: The Rise of Cobra.

Even with the roles, she's doing well for herself, as she's currently married to Hayes MacArthur and has two children with him. She also supports several charity work, and she even appeared in The Vagina Monologues at one point.