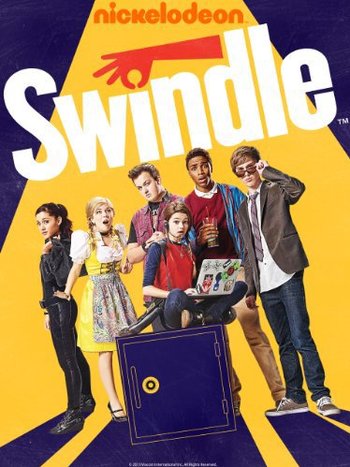 Swindle is a 2013 made for TV movie by Nickelodeon, released on August 24th. It is an adaptation of a book of the same name by Gordon Korman. The film's main cast is comprised almost entirely of stars from Nickelodeon's recent Live-Action TV block- Noah Crawford and Chris O'Neal from How to Rock, Jennette McCurdy from iCarly and its Spin-Off Sam & Cat, Noah Munck from iCarly, Ariana Grande from Victorious and Sam & Cat and Ciara Bravo from Big Time Rush.
Advertisement:

The plot follows Griffin "The Brains" Bing (Crawford) acquiring a baseball card worth 1.2 million dollars, but, being unaware of its value, sells it off for cheap. After he and his friend Ben find out about how they were swindled, they are enraged and determined to steal back the card, enlisting a group of their fellow students to help steal the card.