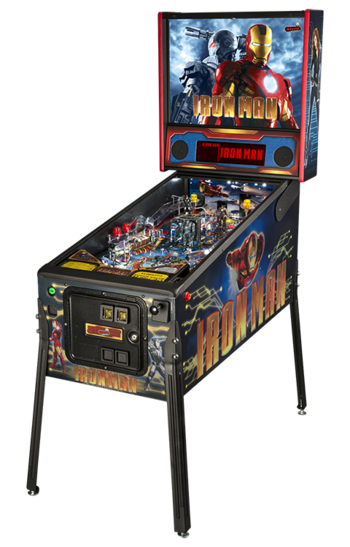 Iron Man is a Licensed Pinball Table designed by John Borg. It was released by Stern Pinball in 2010, just in time for the premiere of the movie Iron Man 2.

As one would expect, the game is based on the first two movies in the Iron Man film series, about genius billionaire industrialist Tony Stark and his various suits of Powered Armor. Defeat Ivan "Whiplash" Vanko and his energy whips, shoot down Justin Hammer's computerized drones, then face Obidiah Stane in his Iron Monger suit when it rises out of the playfield. Engage the US Air Force in aerial dogfights, rescue Jim Rhodes to recruit his War Machine armor, then unleash the Jericho Missile Mayhem and "Do Or Die" modes for some explosive high-scoring action, all to the tune of an original soundtrack and accompanied by digitized film clips.

In Fall 2010, Stern announced "Iron Man Classic," another attempt to reach the home marketnote After Batman with a lower-priced alternative (around $1,400 lower than the original). Compared to the arcade game, the "Classic" removes several game elements, such as the kickback mechanism and the playfield magnets, while the cabinet incorporates various cost-saving manufacturing techniques.

In Spring 2014, Stern announced a remake of the Pro version of this game as the first entry in their Stern Vault series. It was given another run in 2020.

The Iron Man pinball by Stern demonstrates the following tropes: