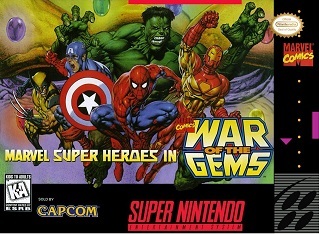 Infinity Gems. There are six different Infinity Gems. Each Gem controls one of the forces of either Time, Space, Power, Reality, Mind, or Soul. It is said that the being who obtains all of the Gems will become omnipotent — ruler of the universe. "Someone has started to gather these six Gems. If they can gather all of the Gems, the universe will suffer a new age of evil. You must help!" Adam Warlock asked Earth's mightiest heroes.
Knowing that the fate of the entire universe is at stake, Earth's mightiest heroes assemble to assist Adam Warlock in preventing the Infinity Gems from falling into the wrong hands!
Opening Narration.
Advertisement:

Marvel Super Heroes: War of the Gems is a Beat 'em Up / Platform Game developed and published in 1996 for the SNES by Capcom, based on a mix between The Infinity Gauntlet and The Infinity War Story Arcs: The six eponymous Infinity Gems have fallen to Earth and Adam Warlock has recruited Earth's Mightiest Heroes to assist him to find the Gems before they fall into the wrong hands.

Gameplay is similar to X-Men: Mutant Apocalypse, also by Capcom. You can choose among Captain America, Spider-Man, Wolverine (Returning from X-Men: Mutant Apocalypse), Iron Man, or Hulk, each with their own set of moves. As you find the Gems, you can choose to take one to the battle, each one with their unique properties. Each character has also a Special Gem Attack which allow the player to clear the screen of enemies, or deal tons of damage to the stronger baddies.

Not to confuse with Marvel Super Heroes, a Fighting Game also by Capcom, and also based on the Infinity Gauntlet story arc.

YOU GOT THE GEM! STAGE CLEAR