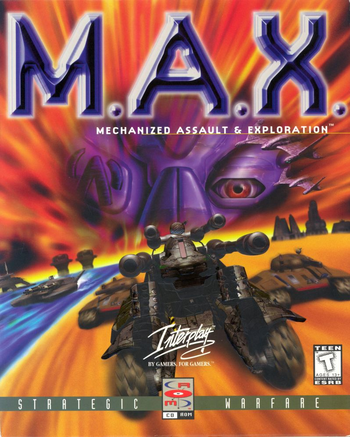 "They were the unwanted. Cults. Religious factions. Even entire governments. Through the intercession of alien rulers called the Concord, they had been taken off a hostile Earth, and given a new chance to gain a new world on which to prosper. Inside each alien-supplied ship lies a faction's entire population. Their alien sponsors promised them a new world on which they can thrive. All they have to do, is fight for it." - Opening Narration

M.A.X.: Mechanized Assault & Exploration is a Turn-Based Strategy game developed and published by Interplay Productions, released for MS-DOS in 1996. Since 2008, it has been available bundled with its sequel from GOG.com.

It is The Future. A hundred small factions, exiled from earth, have been empowered by the Concord, a council of alien "Star Lords", to fight proxy wars for them, in exchange earning new worlds to colonize. The player assumes the role of a M.A.X. Commander, a human brain in a robotic shell designed to withstand the rigors of hyperspace and command mechanized shore parties to clear suitable areas for new settlements. Trouble is, other M.A.X. commanders have their eyes on these same areas, courtesy of alien meddling. A Robot War for control ensues.

The game itself was fairly complex. There were three different resources to manage, buildings had to be connected to one another to get power and resources, and units needed to be resupplied or be unable to build or shoot. Though predominantly turn-based, the game could be played in "simultaneous mode", which was not true Real-Time Strategy but rather every player taking their turns at once. As the various units and structures were still limited in what they could do in a turn, this made for rather different game flow then the regular system.