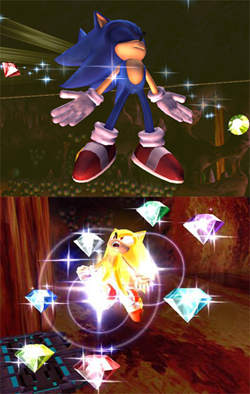 Sonic the Hedgehog turns his entire body into a Super Saiyan.

So, our heroes are fighting with The Dragon. The Action Girl activates her Limit Break and starts glowing violet. The Smart Guy unleashes his Dangerous Forbidden Technique and becomes all covered in green. Their combined attack badly damages The Dragon, but in response, he Turns Red - literally, as his transformation changes all his colors to red. But fear not! The Hero enters Super Mode with his body turning all gold from awesome power and is ready to unleash it all to deliver the final blow...

A shapeshifting trope without an actual change in shape, this is when a character's transformation to a new form is indicated by a change in hair and clothing color, which is meant to symbolize the power. Sometimes, character is just shining with one-colored aura and sometimes, all his color temporary changes into that one. It's clear indicator for the audience that, that character is now getting stronger. And it looks damn cool.

It very often overlaps with Power Glows, especially in Super Robot shows, but there are cases of one that does not require the another.