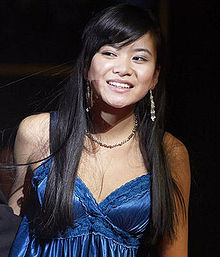 Katie Liu Leung (born 8 August 1987 in Motherwell, Scotland) is a Scottish actress of Chinese ancestry best known for her role as Cho Chang in the Harry Potter series. Leung was born in Motherwell, Lanarkshire to Peter, who was a businessman, and Kar Wai Li Leung, who works in a law firm. Her parents are now divorced. An immigrant from Hong Kong, her father owns a successful Chinese restaurant named Regent in Glasgow and a Chinese wholesale firm named Jade Palace Trading. She attended secondary school at Hamilton College.
Advertisement:

Katie's father saw an advertisement for a Harry Potter and the Goblet of Fire casting call, and suggested she should try out. She waited four hours in line for a five-minute audition, and said that she would rather be shopping than stand in line for a role she was almost certain she wouldn't get. Two weeks later, she was called back for a workshop and was cast as Cho Chang, in the process beating out over 4,500 other girls for the part. She stated in an interview with the Daily Record that her Scottish accent probably gave her an edge in the casting.

In July 2007, Katie Leung was cast by Gold Label Records, a subsidiary of EMI in Hong Kong, to be the female lead in the music video Love Coming Home (愛回家) by Leo Ku. Leung filmed the video in London while promoting the then-new Harry Potter film. Ku described Leung's acting as "professional" and "mature." Leung played Hsui Tai in the episode "Cat Among the Pigeons" of ITV's Agatha Christie's Poirot, which premiered on ITV on 21 September 2008. Leung has been named as Scotland's most stylish female and as the hottest Scotswoman by The Scotsman. She has also been featured in Teen Vogue and in the Evening Standard.

to check out her photography.

She is not related to Tony Leung.