Video Game / Harry Potter and the Order of the Phoenix 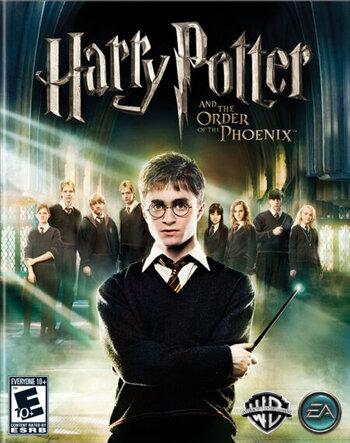 Harry Potter and the Order of the Phoenix is a 2007 Harry Potter video game released by Electronic Arts to coincide with the release of the film by the same name.
Advertisement:

Reversing course from the previous game, the Wide-Open Sandbox approach is back and in a big way. The centerpiece of this game is an elaborate recreation of Hogwarts in which you can pretty much go anywhere at any time with nary a loading screen in your way. As such, the gameplay is heavy on running around the castle and performing tasks for various characters, particularly students whom you want to recruit into Dumbledore's Army. However, any part of the original story that took place outside of Hogwarts is skimmed over quickly, including the whole sequence in the Department of Mysteries, which you'd think would have had a lot of gameplay potential.

After Ron and Hermione were Promoted to Playable in the two previous entries, this game reverts to just Harry being the Player Character, with the exception of brief episodes in which you play as the Weasley twins, Sirius Black, and Dumbledore.