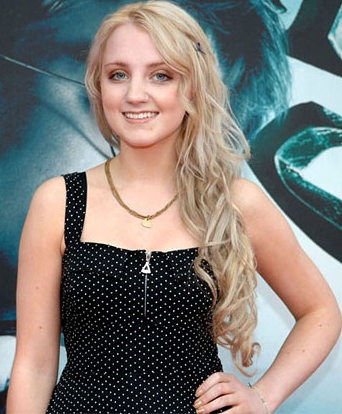 Half of my heart is with Evanna Lu-na-na!
"I promise all Luna fans that I will stay completely true to her because she deserves no less."
Advertisement:

Evanna Patricia Lynch (born August 16, 1991 in Termonfeckin, Ireland) is an Irish actor best known for playing Luna Lovegood in the Harry Potter movies. Her performance has been so widely acclaimed that one could almost say she is Luna. She is also one of the most involved in the Harry Potter fan community, regularly showing up at premieres and conventions.

In 2011, Lynch moved to Hollywood to continue acting and find new roles. In 2012, she was cast as Alehna in the TV series Sinbad, based on Sinbad the Sailor. She was set to act in the crime thriller Monster Butler alongside Malcolm McDowell and fellow Potter actor Gary Oldman, but the project has been impeded. She won plenty of acclaim in her native Ireland for a shockingly dark turn in the film My Name Is Emily.

Lynch is also on the Board of Advisors for the Harry Potter Alliance, a large charity. At Leakycon 2012, she announced she would play Luna Lovegood in the Team StarKid production A Very Potter Senior Year, which made all her fans very excited.

Tropes that apply to Lynch include: