Film / My Name Is Emily 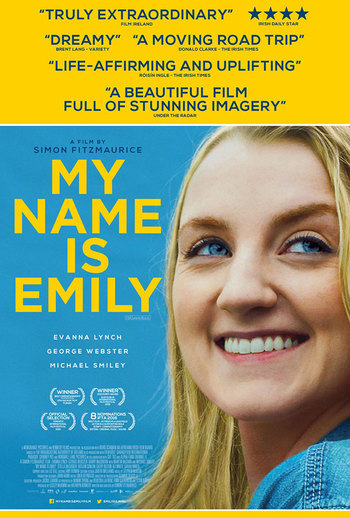 "A fact is a point of view."
My Name Is Emily is a 2015 independent Irish film starring Evanna Lynch, George Webster and Michael Smiley. It drew quite a bit of press from the fact that its director - Simon Fitzmaurice - was diagnosed with motor neuron disease. He wrote and directed the film via eye recognition software.
Advertisement:

Evanna Lynch plays Emily Egan - a disturbed and depressed teenage girl. After her mother died, her father became increasingly odder until he was confined to a mental hospital. The day after she turns sixteen, Emily is worried that she hasn't received news from him in a while. So she runs away and gets a friend from school Arden (Webster) to drive her to the hospital to break her father out.

A trope is a point of view: