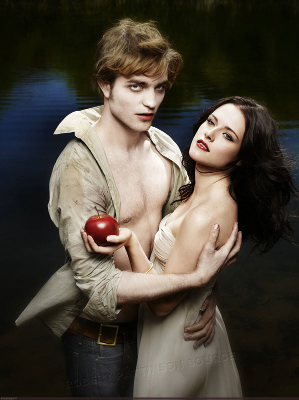 "'That's nice,' she smiled 'I'm sure Cubby can take care of herself for a while. Just rest.' Her long fingers gently and expertly lifted his dark brown hair, stroking the side of his head like a cat, tenderly embracing a brain that was yearning for solace. 'We can do this any way we want,' she purred softly in his ear, and quietly opened his shirt buttons, slipping her strong right hand under the fabric to caress his chest."
— Wolf DeVoon, The Good Walk Alone
Advertisement:

The rough Spear Counterpart to Slip into Something More Comfortable, this trope is used as a visual indicator that the mood between two people is becoming a little more intimate. The most common situation is to have the man begin the scene wearing a suit of some kind, lose the tie and open his shirt by a couple of buttons. The more buttons the shirt has undone, the more amorous the mood. When the shirt's totally unbuttoned, it's also a Shirtless Scene. Two buttons undone is the bare minimum, also frequently accompanied by loosening the sleeves. If it was a tuxedo, you'll find the undone bowtie around the neck (possibly something for the woman to pull off?). You can guess that this is a frequent Fanservice provider.

In many pre-watershed programmes, this is a common way to imply that two people are about to get physical without annoying Moral Guardians. On the flip side, it's also a good indicator to show that they've already done the deed - suggesting that the man hasn't finished properly getting dressed yet. And if the man doesn't have his pants on, that usually means they're in the middle of it. Closely related is Ready for Lovemaking.

Note that this usually happens with some kind of formal wear, although it can also happen with casual clothing. The man doesn't have to wear a suit to qualify, but the shirt has to notably open. Wearing a vest and no shirt also qualifies. Compare Sexy Shirt Switch, Open Shirt Taunt, and Shirtless Scene (which is what this sometimes leads to). It could also be considered a tamer male version of Absolute Cleavage.

Tracey Adams is unbuttoning Peter North's shirt and feeling his chest while he talks on the phone.

Tracey Adams is unbuttoning Peter North's shirt and feeling his chest while he talks on the phone.