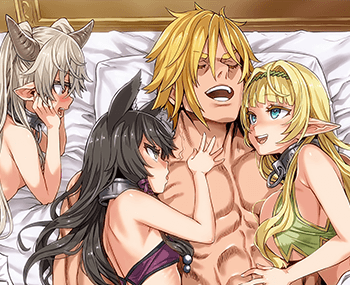 Joking about wedding rings being slave collars isn't usually so literal.
"Perhaps I should add something to make the protagonist more sympathetic? Like contributing to slavery! The protagonist could decide to rescue a cute slave girl by buying her! JP going off-script "Is that really in the script? Yeah. There it is. That can't be real. No one's dumb enough to write that into their stor—" Yes, this really happens in more than one Isekai anime actually."
— Terrible Writing Advice
Advertisement:

A Sub-Trope of both Sympathetic Slave Owner and Themed Harem, when the slave owner is a Hero Protagonist and their slaves double as Love Interests.

An obvious form of Wish-Fulfillment fantasy, this trope allows the protagonist (who is almost always a self-insert or Audience Surrogate, and thus almost Always Male) to enjoy the privilege of a number of servants who are also deeply in love with him/her. The exact nature of the servitude can vary, whether it be legal ownership, Indentured Servitude, a Magically Binding Contract, a pledge of eternal fealty, Mind Manipulation, programming or some other form of Unequal Pairing that makes one person forced or obligated to obey the other.

Due to slavery being seen as an unforgivable violation of a person's consent, agency and freedom; and sex with a slave being legally a form of rape, this trope is one that many writers shy away from. However, the trope has exploded in popularity within Light Novels, becoming one of the most common forms of Love Interest for the Stock Light-Novel Hero alongside the Shana Clone, Stock Light-Novel Calamity Princess and Little Sister Heroine (and these are not mutually exclusive — Mio Narase from The Testament of Sister New Devil is all four). While its initial growth can be put down to its sheer utility in an isekai Power Fantasy story (even the blandest, least charismatic protagonist can attract companions if you can just buy them), the concept would quickly become embedded enough in the genre for "is or was recently a slave" to become a popular trait in heroines regardless of context.

Usually, the relationship will be portrayed as "unproblematic", whereas the slaves are content with being owned by their beloved master and may even possess small amounts of "authority" (e.g., the owner may claim that they can be released any time they like or are allowed to speak their mind and maybe even question their orders). They may even avoid the words "slave" or "slavery" altogether, and portray the arrangement as simply "employment" or "working off a debt". In many portrayals, the owner will also be a Chaste Hero who refuses to use their servants as Sex Slaves, regardless of how much they want them to. However, none of this changes the fact that the protagonist has the option to do indecent things with their harem, and the only thing stopping them is their own self-restraint. In this trope, said self-restraint and desire not to abuse their power is often portrayed as the virtuous, heroic thing to do in opposition to simply freeing the slaves outright. Finally, the fact that they are, if not outright contributing to the upholding of slavery as an institution, at the very least tacitly endorsing it, will probably also go unremarked upon.

A Sub-Trope of Property of Love and often Beautiful Slave Girl. Also a form of Romanticized Abuse and Protagonist-Centered Morality, as the trope is usually provided justification under the logic that there's no problem if the protagonist is a Nice Guy and treats his servants well. Compare Royal Harem, when the person with the harem is a ruler or sovereign.

Contrast Exotic Extended Marriage (when a foreigner is the one with a harem to add a degree "otherness").

Some examples may not be human, such as a sapient Sex Bot.