Series / Two of a Kind 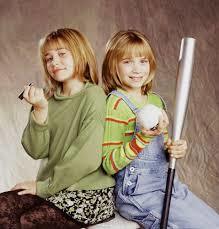 A fairly standard Dom Com series, starring Mary-Kate and Ashley Olsen as Mary-Kate & Ashley Burke, who live their ordinary pre-teen life — except for the fact that their widowed working father, Kevin, can't be at home all the time and therefore needs a sitter to be with them... and he's (at first) not impressed with Carrie, a student in his class whom his daughters picked as their nanny.

This show has parallels with Full House, the most obvious examples being both the prominent roles the Olsen twins take up and Miller-Boyett as production company. It ran for one season only and was the last sitcom produced by Miller-Boyett until their official final sitcom, Fuller House, debuted 18 years later. The show aired from September 1998 to July 1999 and ran for one season.