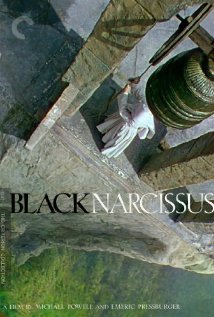 Black Narcissus is a 1947 film by the British director-writer-producer team of Michael Powell and Emeric Pressburger, based on the 1939 novel of the same name by Rumer Godden.
Advertisement:

A group of Anglican nuns travel to the Palace of Mopu, high in the Himalayas (near Darjeeling). They are there to set up a school and hospital for the local people, only to find themselves increasingly seduced by the sensuality of their surroundings—a converted seraglio — and by the local British agent Mister Dean (David Farrar). Clodagh (Deborah Kerr), a newly promoted Sister Superior, is attempting to forget a failed romance that occurred before she took her vows.

An 18-year-old Jean Simmons has a non-speaking but still prominent part as Kanchi, a lower-class girl sent to the monastery to be a servant. Veteran character actress Flora Robson has a small role as Sister Philippa, and Indian child star Sabu plays the Young General in one of the few roles he was able to get as an adult.