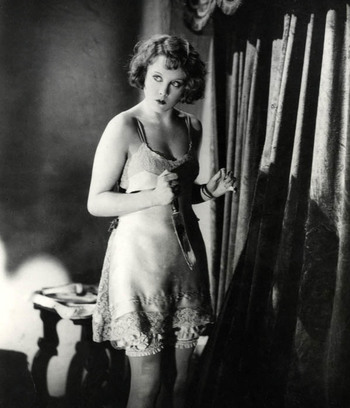 Blackmail is a 1929 British thriller drama film and the first talking film directed by Alfred Hitchcock.

Alice (Anny Ondra) is a London shopgirl who goes out on a date with her handsome boyfriend, Scotland Yard detective Frank Webber (John Longden). She's two-timing him, though, and sneaks out of her date to meet with a sleazy artist, Mr. Crewe (Cyril Ritchard). The artist lures her to his studio and tries to rape her, but she stabs him to death. She thinks she has gotten away with it, but she was seen by petty criminal Tracy (Donald Calthrop), who blackmails the couple.

Blackmail was not only Hitchcock's first talking film but the first talking film made in Britain. It was a huge hit and established Hitchcock as one of Britain's preeminent directors. It bears many of the tropes that would become familiar parts of Alfred Hitchcock's work—not just the Creator Cameo but the Monumental Battle, the Dead-Hand Shot, the use of a blonde heroine in peril, and others.