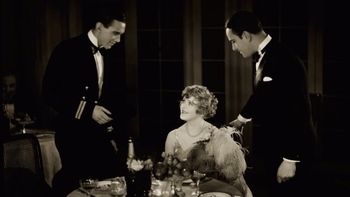 Champagne is a 1928 film from Britain directed by Alfred Hitchcock.

Betty (Betty Balfour) is a spoiled party girl, the only daughter of a filthy rich businessman named Mark. She hires a plane to land her in the middle of the Atlantic Ocean so she can elope with her boyfriend, who is never named in the movie (the credits call him the Boy). Her assertiveness in arranging a wedding with the captain causes the Boy, who is the sort of sexist who likes to be in charge, to break up with her. She winds up flirting with the Man, an older sort with a mustache who casts her a lot of lustful glances.

Meanwhile, the stunt with the plane, as well as Betty's determination to marry the Boy whom her father regards as a gold digger, prompts Mark to take desperate measures. He plays a cruel trick on his daughter, telling her that he lost everything in the stock market and they are now poor. Gullible Betty buys it, and gets a job at a flower girl at a nightclub, where she meets both the Boy and the Man again.

Hitchcock's next-to-last silent film. In a 1976 interview he named Champagne as his least favorite of his own works.