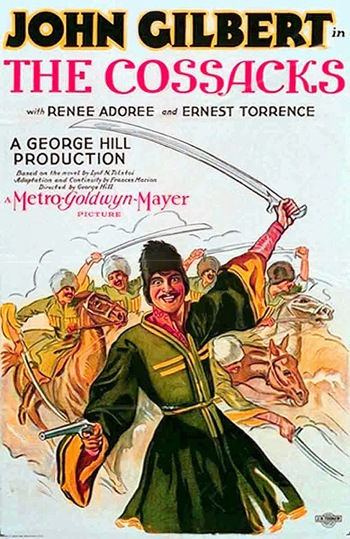 The Cossacks (1928) is a silent film directed by George Hill and Clarence Brown.

It stars John Gilbert, MGM's leading heartthrob for most of The Roaring '20s. Here Gilbert plays Lukashka, son of Ivan, the chief of a band of Cossacks sometime during the Tsarist era. Lukashka disdains the traditional Cossack pastime of killing Turks; instead he only wants to romance pretty villager Maryana (Renee Adoree, Gilbert's co-star in The Big Parade). Lukashka's unwillingness to go off on raids disgusts everyone in the village, including his dad and his girlfriend. Eventually he does go to fight the Turks, winning everyone's respect, but another complication arrives in the form of Prince Olenin from Moscow, who is looking for a Cossack wife to bind the Cossacks closer to the monarchy.