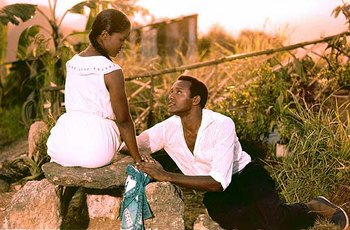 Black Orpheus is a 1959 film, a French production shot in Brazil and in the Portuguese language. It is a retelling of the ancient myth of Orpheus and Eurydice, set in Rio during Carnaval, baased on the play Orfeu da Conceição by Vinícius de Moraes. Orfeo is a trolley conductor who moonlights as a dancer in a samba school. He is engaged to be married to the gorgeous and passionate Mira, but he doesn't seem too enthused about it. On his trolley car, he meets Eurydice, who has arrived in Rio from the countryside because she is being chased by a mysterious man who she thinks is trying to kill her. Orfeo and Eurydice fall in love, but the strange man—Death himself—is still stalking her.

Black Orpheus was shot on a shoestring budget, with a cast of amateurs (except for female lead Marpessa Dawn). It won both the Palme d'Or at the Cannes Film Festival and the Academy Award for Best Foreign Language Film. Compare Orpheus, another Setting Update of the Orpheus myth in the modern day (namely 1950 France). Much of the film's success was due to the music score by Antônio Carlos Jobim and Luiz Bonfá, which became popular and introduced samba, bossa nova, and Brazilian music in general, to a worldwide audience.

It was the favorite movie of Black Panther leader Huey P. Newton, and Ann Dunham, the mother of Barack Obama. And a noted influence on artists such as Jean-Michel Basquiat and directors such as Bong Joon-ho.