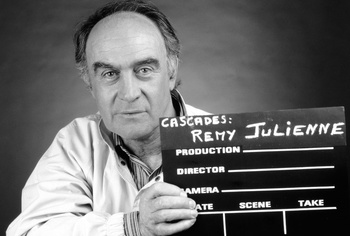 During World War II, he was dared by children evacuated from Paris to ride a bicycle across the local canal in his birth town of Cepoy. This event inspired him to start riding motocross, a sport in which he became a national championship winner in 1957. This brought him to the attention of film stunt coordinator Gil Delamare, who hired him as a motocycle stuntman in 1964's Fantômas.

Following Delamare's tragic death while filming The Saint Lies in Wait in 1966, Julienne became a stunt coordinator. The craziest chases and vehicular stunts of French cinema in The '60s, The '70s, The '80s and The '90s were pretty much all conceived and/or performed by him, from Le Gendarme de Saint-Tropez and the action films of Jean-Paul Belmondo to the Taxi film series. He totalized over 1400 productions, from films (about 400) to television and adverts, making him one of, if not the, most prolific vehicular stuntmen and stunt coordinators in the history of entertainment.

Hollywood quickly noticed him, and he famously wound up working on six of Eon Productions' James Bond films, five of which were directed by John Glen. In particular, he made ordinary vehicles do extraordinary things, such as the Citroen 2CV in For Your Eyes Only, the splitting Renault 11 in A View to a Kill, and the Kenworth tanker truck in Licence to Kill. The last film he worked on was 2005's The Da Vinci Code, he retired afterwards.