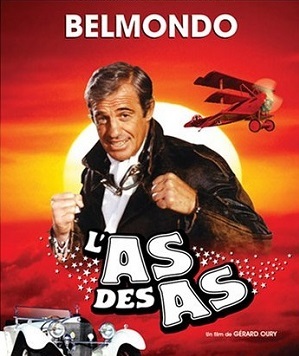 L'As des As (The Ace of Aces, sometimes known as The Super Ace) is a 1982 French-German comedy film written and directed by Gérard Oury (director of The Sucker, La Grande Vadrouille and The Mad Adventures of Rabbi Jacob) and starring Jean-Paul Belmondo.

In 1936, Georges "Jo" Cavalier (Belmondo) is a former World War I Ace Pilot turned professional boxer, and trains and accompanies the French boxing team at the Summer Olympic Games in Nazi Berlin. There, he is constantly followed by a ten year old Jewish boy, Simon Rosenblum (Rachid Ferrache), who is a fan of him. Jo finds out Simon's family is tormented by The Gestapo, and will go out of his way to save them and get them outside of Germany, with the help of Günther von Beckmann (Frank Hoffman), a German officer he befriended after a fierce and indecisive air duel during World War I, and Gabrielle "Gaby" Belcourt (Marie-France Pisier), a French journalist. The rescue includes infiltrating Adolf Hitler's own mansion in Berchtesgaden, of all things.

Not to be confused with Ace of Aces