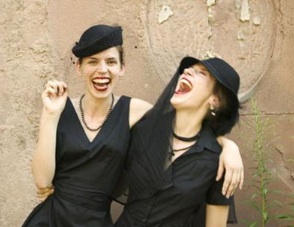 So, how was the funeral?

Let's say you've got a grim situation. It's a battle, a natural disaster, or a exam that no one studied for; whatever it is, the people experiencing it will be either equally grim or actively trying to stay positive.

Then you've got this guy.

He'll be right in the thick of the battle, laughing his head off, and genuinely enjoying himself. Whatever the reason, he's simply enjoying the fight. This can be downright creepy.

Like the character who displays Dissonant Serenity, the one who pulls off Dissonant Laughter is very definitely at odds with the world around him, although, rather than contrasting chaos with calm, they will contrast the grim situation with their lightheartedness.

The nature of the laugh is not important, either - it can be maniacal, like the Laughing Mad, a mildly psychotic chuckle, whatever the character feels like at the time - so long as it's because they're having the time of their lives.

Compare Dissonant Serenity and Laughing Mad, and consider Stepford Smiler. Can be a characteristic of the Blood Knight. Contrast Berserker Tears.