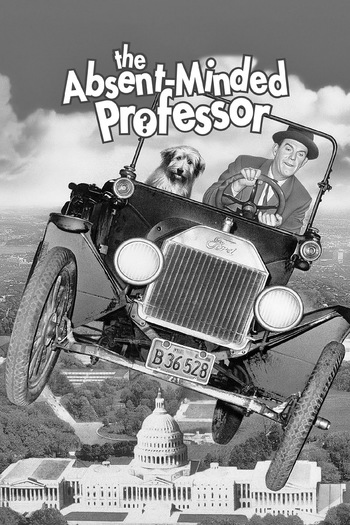 "I said it's Neddy the Nut flying his... old Model T."
Advertisement:

One day, while forgetting his own wedding—not for the first time—Brainard nonetheless succeeds in inventing a substance which has mysterious properties, such as the ability to add kinetic energy with every bounce and flight. Using this substance, which he dubs "flubber", Brainard proceeds to foil the attempts of a rival English professor to woo his fiancée, help Medfield's basketball team to unexpectedly win their Big Game, and win back his girl. Unfortunately, the only person who seems interested in giving Brainard any money for his invention is Corrupt Corporate Executive Alonzo Hawk (Keenan Wynn), who is also threatening to foreclose on the college...

Based on a 1943 short story ("A Situation of Gravity"), the film was followed by a 1963 sequel, Son of Flubber. Remade twice, once in 1988 as a TV movie also titled The Absent-Minded Professor and introducing the idea of a computer sidekick, and once in 1997 as Flubber.