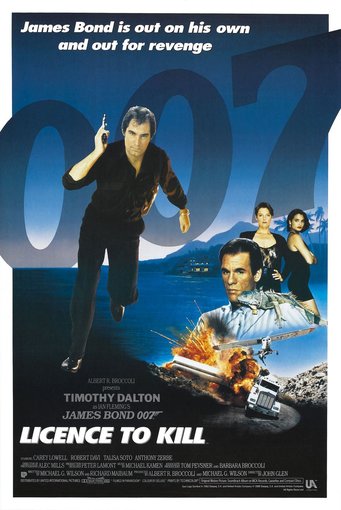 Please don't bet that you'll ever escape me, once I get my sights on you...
M: This private vendetta of yours could easily compromise Her Majesty's government. You have an assignment, and I expect you to carry it out objectively and professionally.
Bond: Then you have my resignation, sir!
M: We're not a country club, 007!
Advertisement:

The one where Bond goes on a Roaring Rampage of Revenge, and end up fighting a Tony Montana Expy.

The sixteenth James Bond film of Eon Productions, the fifth and last to be directed by John Glen and the second and last to star Timothy Dalton. It was released on July 14, 1989. Gladys Knight performed the Title Theme Tune.

When escaped drug lord Franz Sanchez (Robert Davi) brutally attacks Bond's old friend Felix Leiter on his wedding night and murders Leiter's wife, Bond starts a personal vendetta against Sanchez that requires him to become a Rogue Agent in the process. Along the way, he gains the help of CIA agent Pam Bouvier (Carey Lowell).

Notably, the film is the first in the series that was not named after an Ian Fleming story. The plot does, however, take some inspiration from the James Bond short story "The Hildebrand Rarity" as well as the novel of Live and Let Die. It is also the first and so far only film in the series to not have any scene filmed at Pinewood Studios.

In many ways, this movie was the End of an Era:

Dalton was signed to return as James Bond for a third time, but legal issues (a lawsuit concerning television licensing rights sold off cheap by the new MGM owner, Italian fraudster Giancarlo Parretti, to finance the purchase of MGM, without approval of franchise co-owner, the Broccoli/Wilson family), coupled with reluctance, if not outright resistance, of the new MGM management in 1993 (after Parretti was arrested and his bank, France's Credit Lyonnais, assumed control) to see Dalton return once more, kept the series in a long-running hiatus (six and a half years, the longest gap between two films in the franchise to this day) until Dalton officially resigned in April 1994. Pierce Brosnan was then announced as the new James Bond in July of that year.

Preceded by The Living Daylights and followed by GoldenEye.

Example of:
Resignations Not Accepted