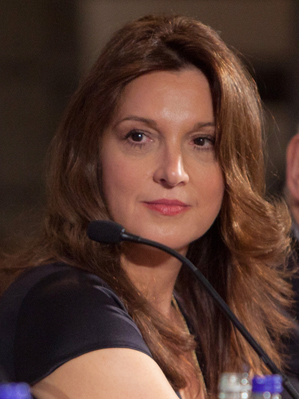 "I think Bond the character is distinct: He's British, he has a certain code that he lives by, he's incorruptible... he's a classical hero, but he's also fallible. He has inner demons, inner conflicts, and he's a romantic."
Advertisement:

Together with her half-brother Michael G. Wilson, she is the current owner and co-head of Eon Productions, the company behind the James Bond film franchise that her father Albert R. "Cubby" Broccoli created with Harry Saltzman, since 1995. She has been assisting her father in it as far back as 1983. She is the daughter of Dana Natol Broccoli, the ex-wife of actor Lewis Wilson (Michael's father).

Perhaps Barbara's biggest impact on the franchise has been her decision to cast Daniel Craig as James Bond, a move that was divisively received upon announcement but ultimately paid off when Casino Royale was released to critical and audience acclaim across the board, with further films cementing him in the role.

She also produced several stage plays, some of them to great success such as the screen-to-stage adaptations of Chitty Chitty Bang Bang and Chariots of Fire.

Films she has produced: