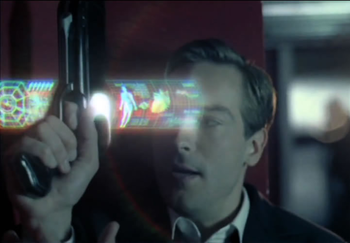 A Smart Gun is an advanced weapon, usually found in Science Fiction, that combines the action of a firearm (usually pistols and rifles) with the utility of a computer. While tropes relating to guns themselves are covered under Guns and Gunplay Tropes, the "Smart" aspect of the trope is unique, giving whoever wields the gun various abilities not normally achievable with a normal gun (or without extensive training).

See also: Sentry Gun, if it's designed to be set down and work autonomously; Attack Drone, for when your smart weapon gets up to go without you; Impossibly Cool Weapon for stylish weapons; and for weapons which are smart in the literal sense see Empathic Weapon and Equippable Ally (which may overlap this trope).