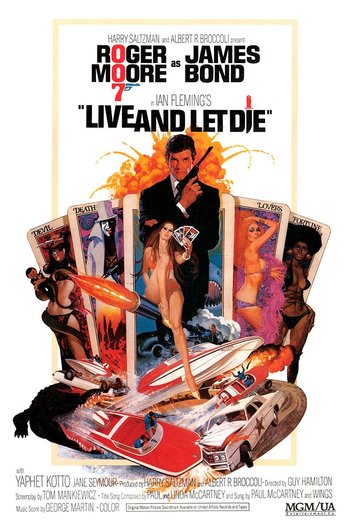 "Why does it matter to ya, when you got a job to do? You got to do it well..."
Bond: My name is-
Mr. Big: Names is for tombstones, baby! Y'all take this honky outside and waste him now!
Advertisement:

The one where Bond is at a war on drugs, and gets called a "honky".

Live and Let Die is the eighth Eon Productions James Bond film, the third in the series to be directed by Guy Hamilton and the first to star Roger Moore. It came out on June 27, 1973. It features a Title Theme Tune sung by Paul McCartney and Wings.

James Bond is assigned to a case involving a drug lord who leads a huge African-American crime network spanning several cities and a Caribbean island where Hollywood Voodoo is practised. After rescuing the drug lord's tarot fortune teller from her virginity, it becomes a plot of everybody trying to kill them. It is the first film where Bond deals with both organized crime and the supernatural, and the first film since Goldfinger to not involve SPECTRE. It is noteworthy in that amongst the things it did to try and distance it from the later Sean Connery films, it didn't include a scene with Q (he's mentioned though). Also includes a boat chase in Louisiana, which resulted in at least a dozen speedboats being written off when they filmed it.

Preceded by Diamonds Are Forever and followed by The Man with the Golden Gun.