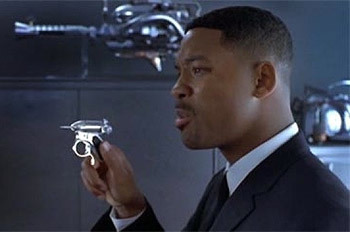 "Feels like I'm gonna break this damn thing!"note Keep in mind that "this damn thing" is actually one hell of a subversion.
"Oh, I'm queer? From the guy whose tiny gun came with a matching purse."
— Conway Stern, Archer
Advertisement:

A character treats a small firearm with contempt. The firearm will likely be physically small and will probably fire small-caliber ammunition, which is considered by some users to be weak.

There is a common perception that any round smaller than a .38 Special is essentially a joke bullet unable to do any real damage. The truth is that Guns Do Not Work That Way. Guns, by definition, are weapons that are designed to kill. Just about any gun made today can inflict a mortal wound in one shot, though a small-caliber bullet probably won't drop you on the spot. Even the oft-mocked .22 Short can tear deep enough into a human body to tear major veins and arteries, and if the bullet reaches the throat or vital organs, the damage will be severe. Even pneumatic weapons firing small pellets at low speed can inflict lethal injuries if they hit someone in a critical area such as the temple or the heart. This is exactly why airsoft events have very strictly enforced safety rules about minimum engagement distances and protective equipment. It's also why it's both frequently forbidden and a bad idea to use frozen paintballs.

The idea that small-caliber and/or low-powered weapons are useless in combat probably comes from the somewhat vague notion of "stopping power" and that Bigger Is Better in this regard.* And the notion of "bigger" meaning "better" itself likely goes back to the pre-repeating days of firearms; early firearms shot with a much lower muzzle velocity and required manually reloading the projectile and the propellant with every shot. As a result, projectile diameters tended to be in the .50 to .70 caliber range to provide the best stopping power at those velocities, so that the target would be downed or incapacitated in a single shot, and anything below .30 caliber was considered useless for any sort of lethal effect. When smokeless powder and repeating firearms became popular, bullets could be fired with higher muzzle velocities and multiple times within a short span, thereby making it possible to have a smaller projectile with the same stopping power as a larger one. Even wounds that are fatal will generally not result in an Instant Death Bullet, and it is not unknown for a target to keep going after having been shot, sometimes not even noticing. So the theory goes that larger caliber weapons are more likely to ensure that a target will actually stop in fewer shots. The other side of the argument is that most of the "evidence" for stopping power is almost purely anecdotal and no scientific mechanism for its function has been confirmed. Furthermore, many comparatively smaller guns can have twice the rounds (or more) per magazine versus a massive Hand Cannon as well as far less recoil and weight, and so are "more likely" to be accurate. While size certainly does matter in ballistics, the debate mostly centers around weapons of the same type (pistols vs pistols, rifle vs rifles), not a Derringer next to a .50 BMG sniper rifle, thus the differences are comparatively small.

On the other hand, small-caliber firearms, such as .22 rimfire "Purse Guns", are worthless against most forms of ballistic armor, which will stop a small caliber round flat. Literally, the bullet will flatten to the width of a coin, or thereabouts. Higher caliber pistols like the .45 and 9mm are more likely to get through lighter armors but aren't guaranteed to do so, while rifle rounds like the 5.56 require modern heavy-duty armor to have any chance of stopping them. Even then, some bruises or even broken bones will result from the force of the shot. Some have even mentioned this as an advantage that non-penetrative shots have over penetrative ones—a bullet that pierces the vest but in a (relatively) nonvital area might be ignored for the moment, but it's a lot harder to attack someone if you're gasping for air from broken ribs caused by a bullet smashing your chestplate in.

On the other other hand, there's also the issue of "Over-penetration"— when a bullet goes straight through a target. The result is that (1) you wind up hitting things you didn't intend to, and (2) you wind up preventing the bullet from transferring all of its energy to the intended target.

Since you can't exactly subject live humans to rigorously controlled lethal testing, it's doubtful this debate will end any time soon.

Often popular as a Hidden Weapon stored in Victoria's Secret Compartment. It is also occasionally seen as the so-called "holdout pistol", a common stereotypical weapon for the Lovable Rogue or The Gambler. Both are often characterized as preferring a perceived low powered purely defensive weapon to avoid lethal force.note Even in reality, pistols (as opposed to dedicated assault weapons such as rifles) are more often used defensively as a distraction in order to discourage serious pursuit, allowing the user to escape relatively unchallenged. Also, a rifleman generally needs to stop moving in order to take any meaningful aim, a sure way to increase the probability of being hit even by desperate defensive fire. For the opposite end of the spectrum, see Hand Cannon and BFG, with Punch-Packing Pistol in-between. In shooter games, a Little Useless Gun tends to be a Ranged Emergency Weapon.

Good thing she pointed at the cake first.

Good thing she pointed at the cake first.