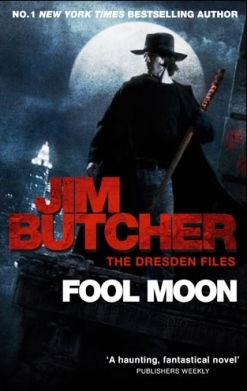 Warning! All spoilers for Storm Front are unmarked on this page!

The One With… werewolves.

Business has been slow since the events of Storm Front, to the point that Harry Dresden is wondering if his next square meal will be a block of ramen.

However, things start to look up when the police discover a brutally-mutilated corpse with some odd, wolfish footprints nearby. It looks like someone has full moon fever, and Harry must draw upon all his magical resources to find out how to stop them.

Fool Moon is book #2 in The Dresden Files. Now has its own Shout Out page.

Harry: These belts, man, the power they have given you. It's bad. You can't handle it. It's gotten into your head, and you aren't thinking straight. Give them up. You can still walk away from all of this, do the right thing. Come on, Denton. Don't throw away everything you fought for all those years. There is a better way than this. [shows Benn] Look at her. Those belts are like a drug. Is this the kind of person she was? Is this the kind of person you want to be? Wilson, Harris, were they always like they are now? You're turning into monsters, man. You've got to get out of this. Before you're all the way gone.
Denton: [closes his eyes, then shakes his head] You're a decent man, Mr Dresden. But you've got no idea how the world works. I am sorry you've gotten in the way. Necessary sacrifices.