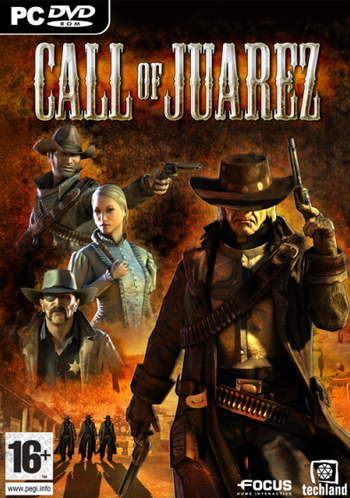 Billy Candle has had a crappy life: his dad is gone, his mom married a guy who beat him up regularly, he was mistreated by other kids for being a Mexican; when he ran away from home to find lost treasures, he didn't make it far; a girl he loved had an Overprotective Dad and he lost both the girl and his job. He returns to his hometown of Hope, "the most hopeless place on Earth", because he has nowhere left to go... and finds his mother and stepfather shot dead in their home, "Call of Juarez" written in blood above their bodies. Worse even, he is seen by his step-uncle Reverend Ray who assumes he is the murderer and gives chase to him...

Call of Juarez is a fast-paced Western First-Person Shooter, where the player alternatingly assumes the roles of Billy and Reverend Ray, who is after his head. Billy is more of a Fragile Speedster with heavy emphasis on stealth, whereas Ray is a Mighty Glacier and The Gunslinger, which allows for an interesting twist: revisiting the same level (Ray is chasing after Billy, after all) never grows boring, thanks to the vastly different gameplay styles of the two.

Tropes found in the original Call of Juarez: