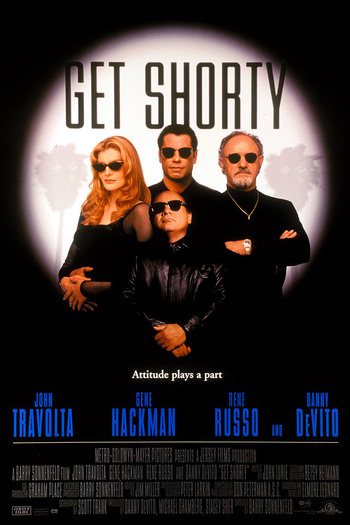 "I got an idea for a movie."
— Chili Palmer
Advertisement:

Loan shark Chili Palmer hates his job, especially with his new boss still holding a grudge over that time Chili broke his nose and shot at him. When a dry cleaner in to him for a hundred large dies on a plane, he goes to the wife to see if the insurance settlement can cover his debt, only to find out that the son of a bitch isn't dead. So Chili follows the dry cleaner to Las Vegas to find he's moved on to Los Angeles. While he's in LA, he agrees to do a favor for the casino management and check in with a movie producer who still owes on a marker. Chili, however, is something of a movie aficionado, and likes the idea of working in the movie business — so when he meets Harry, the producer, he takes the opportunity to pitch his story to him. They hit it off, so to get Harry to help him make his movie, he agrees to help Harry with his money problems. The story takes off from there as Chili tangles with Harry's crooked creditors, helps him raise the money to make what he thinks will be his best movie ever, and ultimately puts off his old boss as he gets involved in the movie business.

A 1990 novel by Elmore Leonard, Get Shorty was adapted into a 1995 film directed by Barry Sonnenfeld, starring John Travolta as Chili alongside an all-star cast including Gene Hackman, Danny DeVito, and Rene Russo. Both the novel and movie are an Affectionate Parody of the film industry, and both so well-received that Leonard wrote a rare sequel, Be Cool, which also received a film adaptation, though neither managed to repeat the success of the original. In 2017, a television adaptation loosely inspired by the original premiered on ePix, with an original cast and story.