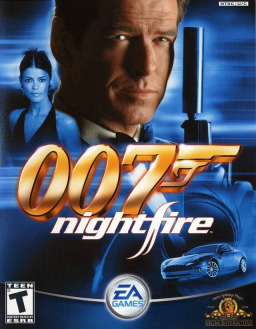 Don't love me quietly, do it with intensity...

The One with... the plot following Moonraker.

James Bond 007: NightFire is a First-Person Shooter released in 2002 and the sequel to 2001's James Bond 007 in... Agent Under Fire, as well as the first Bond game to feature the likeness of Pierce Brosnannote but the voice of actor Maxwell Caulfield as secret agent James Bond in an original storyline not based on one of the movies.

The plot of the game revolves around an undercover investigation into philanthropist Raphael Drake, whose organisation, Phoenix, works tirelessly to decommission old Nuclear reactors and missiles.

It soon becomes apparent that Phoenix's intentions are less than scrupulous, sending Bond to Austria, Japan and an orbiting missile platform to stop Drake's fiendish plot.

NightFire on consoles was developed by Eurocom and EA Canada and was released on PlayStation 2, Nintendo GameCube, and Xbox. On PC and Mac, there's a version developed by Gearbox Software with the GoldSrc engine. A third version for the Game Boy Advance was developed by JV Games. There are differences between these versions from gameplay to minor story changes.

A Fan Remake of the PC version based on the Source engine is currently in development.

An alpha release is pending.