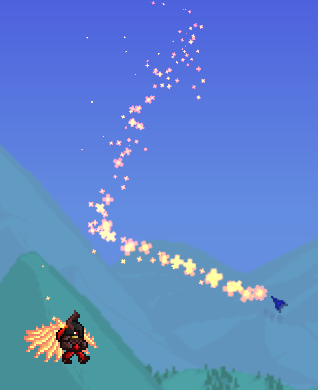 Ever watch a Homing Projectile suffer yet another Hero-Tracking Failure and think to yourself, "hell, I could fly a missile better than that"? Now you can!

The Player-Guided Missile is any Video Game projectile attack or weapon which the player can manually steer or guide toward their desired target using their player movement controls. These can be more dangerous than ordinary homing missiles (at least in the hands of a skilled player), although they do mean that while the player is busy piloting the missile, their character is left open and vulnerable to attack.

The projectile can take many forms - an actual homing missile or Precision-Guided Boomerang, for example - and 3D games frequently utilize a Missile Cam so the player can steer the projectile from its own point of view. Which also makes it usable not just for combat, but also for general scouting, recon, and solving various puzzles (typically by activating an otherwise inaccessible switch or control panel).

This is Truth in Television, as manual command to line-of-sight

systems to guide rockets or missiles exist. These homing methods rely on the operator to steer the missile's flight path via joystick; the commands from the joystick is relayed to the missile via various methods, most popularly via wire guidance.

That being said, they are nowhere near as precisely maneuverable as their Video Game counterparts, mostly because they are extremely fast, and require extensive regular training to operate. For this reason, semi-automatic command to line-of-sight

systems are more popular and reliable. The operator firing the missile does not need to actually adjust the missile manually; merely aiming continuously at the target is enough.

Note that an example only counts if the player has more or less direct control of the projectile's flight path — simply "aiming" or "locking on" to a target before firing isn't enough. Also note that these only count when wielded by a live human player, as there's no way to distinguish it from a normal homing missile if it's fired from the hands of an AI-controlled character.